Skip to main content
To provide you with the best experience, Chão do Rio - Turismo de Aldeia uses its own and third-party cookies on its website for technical, analytical and marketing purposes. By continuing to browse our site, you are agreeing to our use of cookies. Please consult our Cookie Notice for more information.

Travancinha is a village with an old history, remaining to the present day many examples of the heritage that revels this antiquity. Using sources such as the website of the Parish Council of Travancinha, the General Directorate Cultural Patrimony and some testimonies of residents in the village, such as Prof. Henrique Camilo, author of the texts on the website of the parish council, to whom we thank the patience and the willingness to collaborate, below we present some examples of this heritage that we can still see today, as well as some places of interest, either by its natural setting or by the evidence of a culture of a charming mountain village. 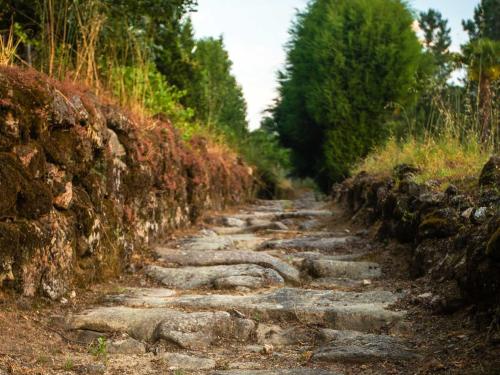 Although there are no studies to establish its true origin, it is assumed that the path that borders the property Chão do Rio, also known as "Canada das Cerejeiras" has a Roman origin and has been part of the Roman road “Via araocelum ad civitas Bobadela” connecting Mangualde (araocelum) to Bobadela (municipium) through:. Nelas, Caldas da Felgueira, Seixo, “Buraco” bridge, Travancinha, Lagares and Travanca". It was this Roman road and its strategic location that gave origin to the toponym "Travancinha".
GPS coordinates: 40º 25'09.64''N, 7º 49'25.05''W 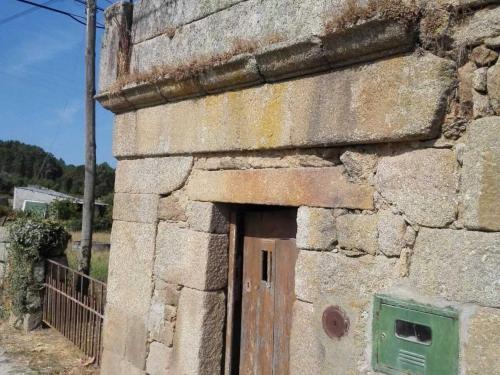 Our Lady of Help' Chapel 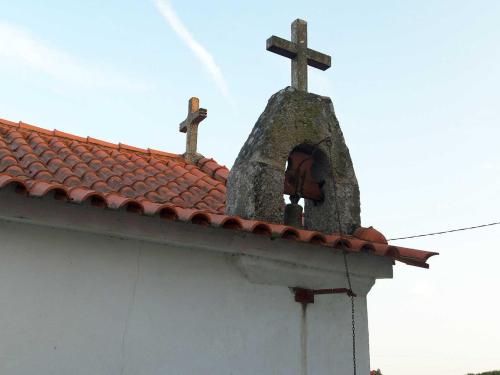 In this chapel located in the neighborhood of São Gião we can find the image of Our Lady of Help carved in granite, which gives name to the chapel. However, it is in homage to our Lady of Fatima, an image also present there, that the night procession of candles is carried out in which the Mordomas of the feast transport the image statue of our Lady of Fatima to the Parish Church, while praying the rosary and sing religious songs. In the next day, in a daytime festivity, the image returns to the chapel of Our Lady of Help, walking the streets of the village. This procession takes place on the following Saturday and Sunday to 13 May.
GPS coordinates: 40º 25'19.86''N, 7º 49'33.48''W 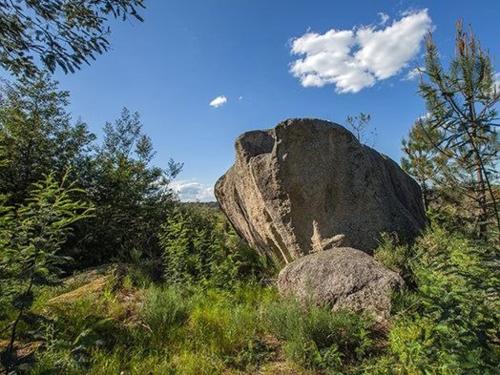 In Travancinha it is said that in the rock near the Municipal road, in a chair carved in the rock sat the famous João Brandão, a popular figure, known as the Beiras terror, waiting for his victims to pass the road ahead, to assault them and Loot
Born on March 1, 1825, in Midões (Casal da Senhora), his full name was João Víctor da Silva Brandão, being the son of Manuel Brandão, a blacksmith by profession. His father was the leader of a group of criminals, almost all of them of his family, who made a guerrilla struggle during the conflict between liberals and absolutists.

For decades João Brandão was a murderer, robbery and extortionist. He was arrested several times, but he had always been free and clear of his crimes, due to the protection of high-ranking, liberal-minded individuals whom a willing criminal was very useful. For this reason, his family ascended socially, that is why João Brandão belonged to the Chamber of Midões, between 1849 and 1853.
The establishment of peace and the centralization of the political administration led to the downfall of João Brandão, having finally, in 1869, been condemned in the Tábua court to the exile in Africa. Nevertheless, there he enjoyed all the privileges and created a prosperous factory of “aguardente” (kind of brandy).
GPS coordinates: 40º 25'28.97''N, 7º 50'36.34''W 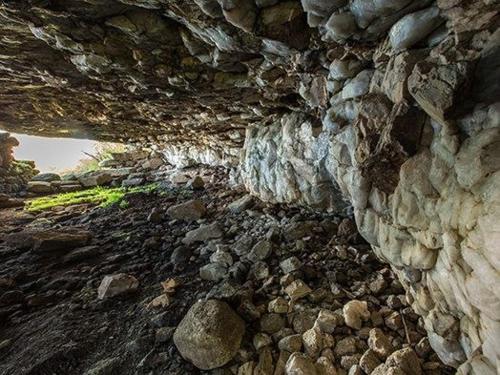 The Seixinha cave doesn’t has its limits on the County of Seia. Beyond the Seixinha Cave, begins the county of Oliveira do Hospital. As we leave the main road, we enter a zone of great cliffs and a fantastic view over Serra da Estrela and the Seia River Valley. And soon we get a feeling that we are entering a mysterious place. In fact, when we look at the big boulder for a while, we can not imagine what we will find when we enter its small, half-hidden, entrance.
There we are dazzled by the beauty of white quartz stone. There is no document that reports its existence, or its purpose. But surely, it served as shelter to shepherds and their flocks in storm days.
GPS coordinates: 40º 25'36.02''N, 7º 50'45.26''W 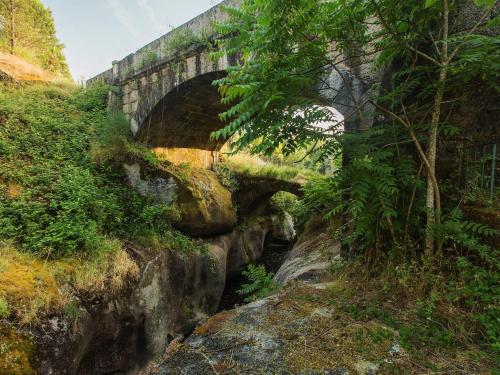 Beyond the limits of the municipality of Seia, near the parish of Travancinha, following the M507-1, towards Seixo da Beira, near the Seia River, there is a place of great beauty, known as Moinho do Buraco (hole mill). There, there is a water mill and the water of the river in its  passage has excavated the rock in great depth (forming big holes). Placed, next to the most recent bridge, that integrates the M507-1, there is a bridge of Roman origin. This bridge, like the roman path of Travancinha would integrate the route to  the "splendidissima civitas" of Bobadela.
GPS  coordinates: 40º 25'39.04''N, 7º 50'58.51''W 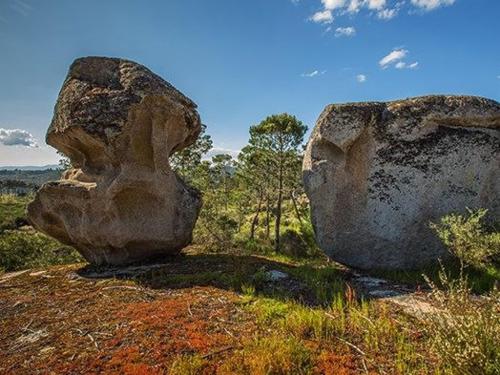 At the entrance of Travancinha there is a group of rock formations of high Geological value, being at the moment to be studied its possible classification.
Pedunculated rocks are rock formations resulting from the erosion caused by the action of the wind and the sands. Pedunculated rocks are thinner at the bottom than at the top. Being granite rocks, these existing rock in Travancinha, have acquired particular forms very funny (toothed apple and penguin).
GPS coordinates: 40º 25'35.28''N, 7º 49'54.24''W 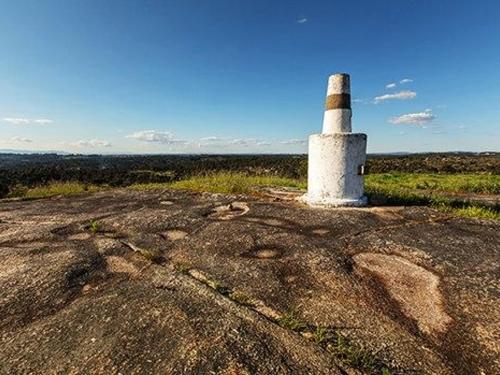 Known as "Pilar da Borceda" this is one of the two geodesic landmarks of Travancinha. The view is fantastic and from there it is possible to see three districts: Guarda, Coimbra and Viseu and several mountain ranges such as Estrela, Caramulo, Azores, Buçaco and Lousã. It is a priveliedge spot for astronomic observation.
GPS coordinates: 40º 25'37.96''N, 7º 49'23.54''W 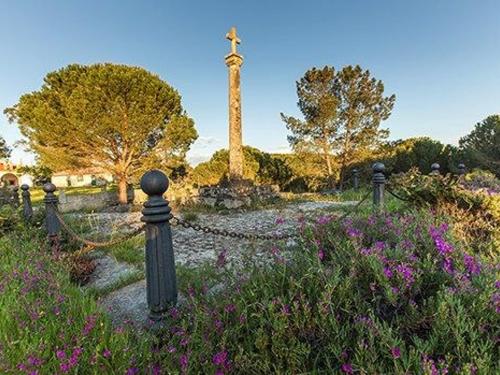 The date of its construction is unknown, but everything points to have been erected in the year 1840.

In 1940, the year in which Salazar, taking advantage of the celebrations of the "Double Centenary of Nationality" (Foundation of Nationality in 1140 and Restoration of 1640), in order to promote of the virtues of his regime, decided to launch a set of patriotic celebrations by all the country. The so-called "Commemorations of Centennial Commemorations" were set up to build the "Independence Cruises", with the aim of multiplying the existing double centenary cruises. The double centenary cruise of Travancinha was one of those that already existed.
GPS coordinates: 40º 25'27.08''N, 7º 48'46.30''W

Our Lady of Virtues Chapel 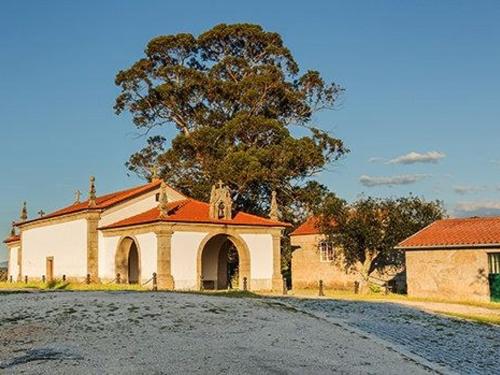 Our Lady of Virtues Chapel, was built by a nobleman from the area of the lower Mondego, in 1742. This nobleman traveled with his family to the thermal baths of Unhais da Serra, when, passing through Travancinha, had to stop due to the sudden illness of his son. He camped on the grounds now belonging to the Brotherhood of Our Lady of Virtues, and in the days that passed there, having the death of his son imminent, he promised to Our Lady that if she cured his son, in that place, he wood erect temple in her honor. The son overcame his illness and the temple was built.

Even today, during the fair of Saints, many persons arrive here coming from the region of that nobleman. Probably, this fair, is a sequence of a pilgrimage to Our Lady of the Virtues. 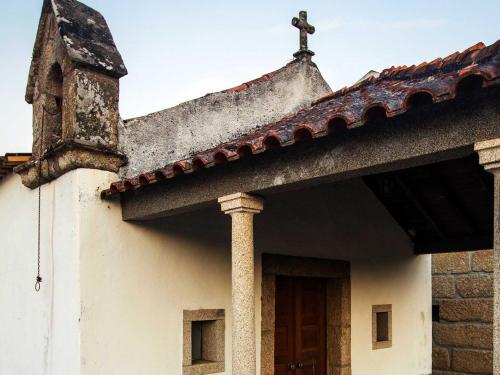 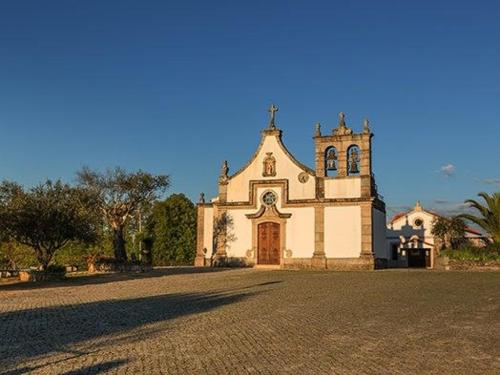 The people of Travancinha have a strong religious nature. The village patroness is Our Lady of the Rosary, which appears in the main altar of the Parish church. Outside of this eighteenth century church, on its facade, there is a statue of St. Peter, made out of stone.
GPS coordinates: 40º 25'10.52''N, 7º 49'13.51''W 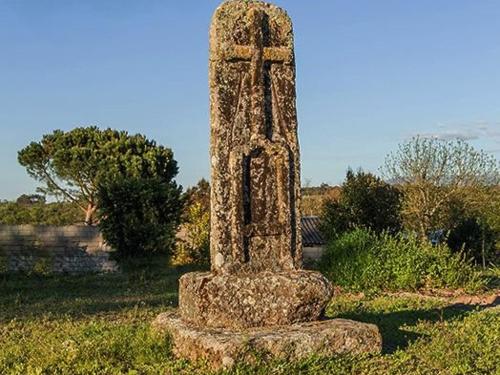 "It's following the Council of Trent (1545-1563) that the Brotherhood of Souls is created as a way to institutionalize the belief in Purgatory and enforce the belief that the souls of the dead would come out of the Purgatory much sooner if more prayers and alms were made by the living.

Portugal is the only country that has in its cultural heritage the "Alminhas" (a type of wayside shrine), usually located on the edge of rural roads, at crossroads, into and out of the villages. These are popular representations of Souls in Purgatory who supplicate prayers and alms.

There are many "Alminhas" across the country. In Travancinha there are four. Until the last century, by them passed by, the pilgrims on the way to St. Euphemia. " In travancinha.pt
GPS  coordinates:

Our Lady of Health Chapel 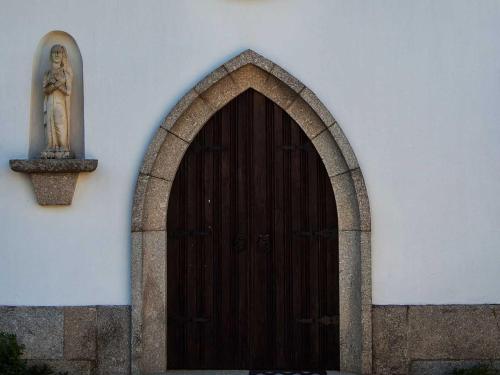 Our Lady of Health Chapel, St Bento chapel in the past (St Bento was the patron of the military orders), belonged to the Military Detachment. A fire almost destroyed completely it and the inhabitants of Casal raised it in honor of the Lady of Health. It has its annual celebration in honor of Our Lady of Health, on Sunday of Pascoela (the Monday after Sunday Easter).
GPS coordinates: 40º 24'50.97''N, 7º 49'05.47''W 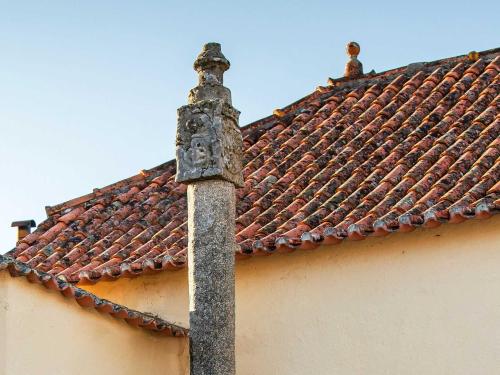 "Casal still has its pillory, built following the manueline charter. It was raised before the the former Comenda House. It is said that originally was made out of wood, as often happened throughout the Middle Ages, but that after attempted robbery, was replaced by the present model made out of stone. "

Classified as Public Interest monument in 1933. 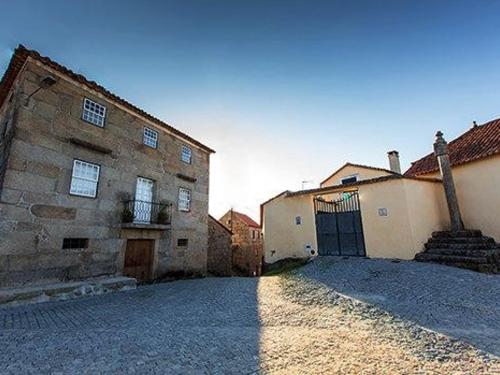 Casal de Travancinha was the county seat with a letter of foral (royal document that establishes a municipality) from D. Manuel I, in 1514. It was formed by the parishes of Travancinha, Sameice, Várzea de Meruge, São Paio de Codeço and Meruge. It had a Chamber house, a Court, a jail, a Military Detachment and a Botica (Pharmacy). It had a judge, procurator, and a secretary of registration.The date of its extinction is unknown, but in 1836 it was already a part of the municipality of Ervedal da Beira and remained there until July 24, 1855, when it became part of the municipality of Seia. Although in private possession, all those buildings still exist today.
GPS coordinates: 40º 24'50.33''N, 7º 49'06.02''W 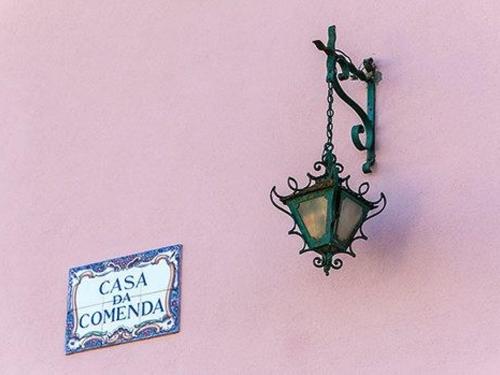 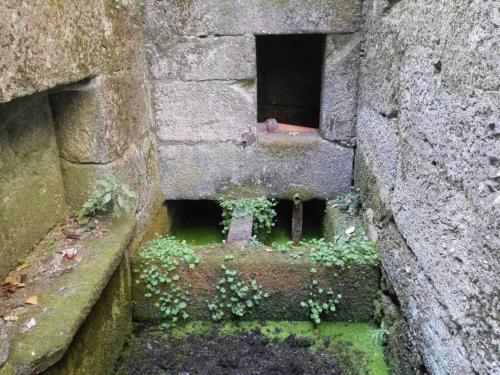 It is located in Casal, between the Comenda House and the Military Detachment.
For centuries, it has supplied water for the intire Casal village. After the 25 of April of 1974 (portuguese democratic revolution), was donated by the village Council, to the owners of the house where it was installed the  Military Detachment, in exchange for the extension of a street. Already in the XXI century, also by action of the village council, it returned to the public domain.
GPS coordinates: 40º 24'49.22''N, 7º 49'04.36''W 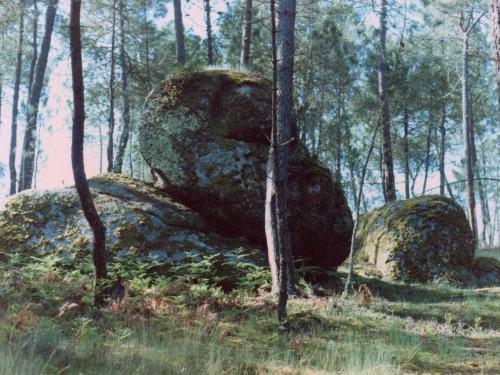 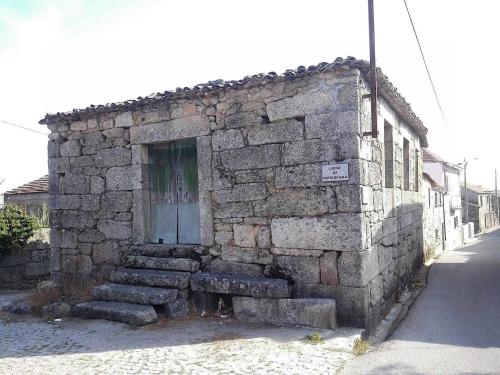 In the XVI century, it was in this small house that the crimes of Casal the Travancinha County were tried. The name given to the square where the building is located refers to the court, since it is called: door of the living room. In fact, it is the door that stands out in the windowless facade, which would be open during the judgments made there.
GPS  coordinates: 40º 24'50.74''N, 7º 49'13.08''W 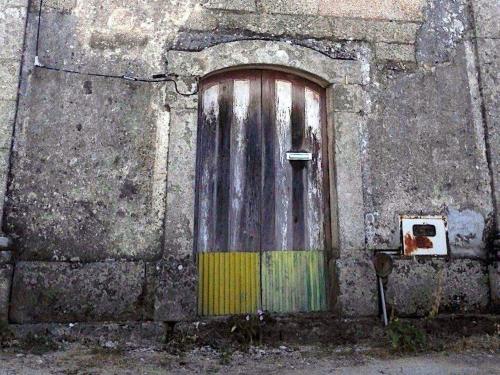 After the 1514 Foral, when Casal de Travancinha was considered as the county seat, and for about three centuries, the county's jail was installed in Travancinha, in the current neighborhood of Corro. From the end of the nineteenth century until the construction of the Centennial Plan schools, already in the twentieth century, it was there that the primary school functioned, before moving to private ownership.
GPS  coordinates: 40º 25'16.36''N, 7º 49'19.30''W
Previous
Next